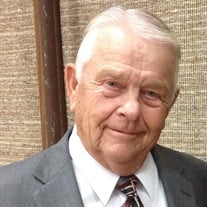 Vaughn Wadsworth Stoker died of injuries from a car accident on July 4, 2015. He was born on May 26, 1932 in Burley, Idaho to Herman D. and Minnie Child Stoker. He was the fifth child of eight having three sisters and four brothers: Ora, Shirley, Deloss, Lloyd, Lynn, Carol and Robert. Vaughn was raised on a farm so he learned how to work at an early age. He enjoyed this aspect of life and passed this on to his family. He would say, “We work hard; and then we play hard.” He met the love of his life, Jean Brownell, at Ricks College. They were married in the Idaho Falls LDS Temple on August 27, 1952. Three months later he was inducted into the US Army and served during the Korean Conflict as a mechanic. He stated often that the prayers of his mother and wife protected him from harm and he returned home safely after 17 months of duty. After his discharge, he began farming in partnership with his brothers, Lynn and Deloss. Later he became the sole owner and branched out to process and sell milk under the Stoker Dairy label. The dairy provided milk wholesale, for home delivery and from Stoker Dairy Depots in Burley, Paul and Twin Falls, Idaho. He and Jean were blessed with seven children: Michael (Rhonda) Stoker, Mark (Becky) Stoker, Craig (Janie) Stoker, Curtis (Carey) Stoker, Susan (Jay) Anderson, Kevin (Pam) Stoker and Tammy (George) Valentine. At the time of his death they had 39 grandchildren and 48 great-grandchildren. He loved his family most of all. He had fun with them but when a serious talk was needed he didn’t hesitate to give one with an outpouring of love. He is survived by his three sisters: Ora Whittier, Shirley Clark and Carol Satchwell, and his two brothers: Lynn and Robert. Vaughn was a faithful member of the Church of Jesus Christ of Latter Days Saints and his testimony provided the framework for his life. He served as a Bishop’s Counselor and Elders’ Quorum President as well as in many other callings through the years. He and Jean served together as temple workers for the last 13 years in the Logan, Utah temple and the Twin Falls, Idaho temple. They served as full-time missionaries in the Missouri Historical Sites Mission (1998-1999) and the Palmyra New York Temple Mission (2005). He enjoyed the outdoors both working and recreating. He had a beautiful yard where he labored many hours and took great enjoyment in. He was an avid fisherman and loved being out on his boat making great memories with family and friends. Vaughn was a joyful man with an infectious laugh who enjoyed a good story or practical joke. Funeral services will be held 11:00 a.m. Saturday, July 11, 2015 at the Unity LDS Church 275 S 250 E Burley, Idaho. A viewing for friends and family will be held Friday evening from 6-8:00 p.m. and on Saturday from 9:30 a.m. to 10:45 a.m. both viewing will be held at the Unity LDS Church. Burial will follow at the Pleasant View Cemetery. Services are under the direction of Serenity Funeral Home 801-599-5220.

Vaughn Wadsworth Stoker died of injuries from a car accident on July 4, 2015. He was born on May 26, 1932 in Burley, Idaho to Herman D. and Minnie Child Stoker. He was the fifth child of eight having three sisters and four brothers: Ora, Shirley,... View Obituary & Service Information

The family of Vaughn Wadsworth Stoker created this Life Tributes page to make it easy to share your memories.

Vaughn Wadsworth Stoker died of injuries from a car accident...