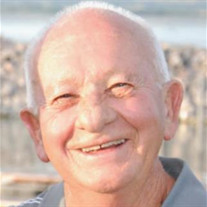 Vern Duane Dutton, 78, passed peacefully and on Oct. 23, 2017 surrounded by his family and his now with our Lord and Savior. Vern was born December 8, 1938 in Idaho falls, Idaho to Ernest and Ruth Dutton. He was the youngest of 6. They made their home in Salmon, Idaho. He lost both his parents at a young age and was raised by his oldest sister Lucille Stevens and brother-in-law Don Stevens. They moved him and his siblings to Pocatello, Idaho. He graduated from Pocatello High School in 1957. He went on to college and graduated with an associate’s degree in Electrical Engineering from Idaho State University. He was offered a position with Hewlett Packard in Colorado Springs, Colorado just after graduation. Once given the opportunity for transfer with the company to Boise Vern jumped on the chance to come back to his home state. He finished his career off at the Boise site where he was able to retire early and comfortably. Vern would tell you without a doubt that his greatest accomplishment was raising his two children, Wendy and Jeff, and watching his family grow with grandchildren. He continued to care for his family throughout his life with more love, compassion, and patience then you can imagine. He was a loving father and grandfather. We will miss his smile, that twinkle in his eye, his teasing, and most of all his laughter. Vern had a few hobbies such as coin collecting, seeing what treasures he could find while metal detecting, and taking pride in his yard. All of which brought him much joy. He mostly loved watching his grandchildren play sports, watching their dance recitals, going fishing, and listening to his grandchildren read to him. He found pleasure in the simpler things in life and never found the need for more. He is survived by his two children and their spouses- Wendy (Scott) Hamilton and Jeff (Amanda) Dutton, along with his six grandchildren – Kory, Caitlyn, Jake, Ellie, Denver, and McKenley, by Don Stevens who raised him as his own alongside Brad and Anne who were as much a brother and sister as there could be. He was preceded in death by his parents Ernest and Ruth Dutton, his siblings Lloyd Dutton, Gerald Dutton, Dale Dutton, Dortha Montgomery and Lucille Stevens. He touched many with his kindness and generosity. One statement we have heard said often about Vern is “I never knew him to say a bad word about anyone.” He was a true blessing from God and will be missed by all of us. At Vern’s request there will not be a service at this time. Family and friends will be invited to attend a celebration of his life along with the scattering of his ashes at a later date and time.

Vern Duane Dutton, 78, passed peacefully and on Oct. 23, 2017 surrounded by his family and his now with our Lord and Savior. Vern was born December 8, 1938 in Idaho falls, Idaho to Ernest and Ruth Dutton. He was the youngest of 6. They made... View Obituary & Service Information

The family of Vern Duane Dutton created this Life Tributes page to make it easy to share your memories.