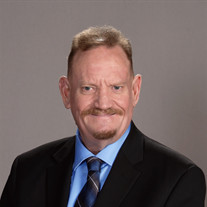 Vernon W. Frasch passed away peacefully on December 26, 2019, at home in West Jordan, UT. He will be deeply missed by his family and friends. Vernon was born December 9, 1959, in Lancaster, CA to Harley and Kathryn Frasch. In 2014, Vernon married Rae Lindsay. Though their time together was short, the love and commitment they shared carried Vernon through various challenges, including his health. In 1960, the family moved to St. Charles, SD to help with the family farm. He had several fond memories of his time on the farm, especially his bond with Blackie, his Labrador Retriever. He graduated from Bonesteel High School in 1978. Vernon’s first job was working on a ranch near St. Charles, SD. In 1983, Vernon joined the U.S. Marine Corps, and proudly served his country as a tracked vehicle technician until March of 1989. After receiving his honorary discharge as a corporal from the Marines Vernon resided in the Sacramento, CA area. He attended American River Community College, and earned a degree in welding. Vernon started his welding career building commercial grade emergency ladders. Soon after, he began working for C-Tech/Doppelmayr in Sacramento, CA, and then transferred with the company’s move to Salt Lake City, UT. Vernon was active in the community through his involvement at: Prince of Peace Lutheran Church, Veteran’s Administration Peer Support program, and the Utah West Marie Corps League. He was especially proud of his experience hosting foreign exchange students. Vernon is preceded in death by his grandparents, Arthur and Jewel Richardson (maternal), and Alfred and Christina Frasch (paternal). Vernon is survived by his wife, Rae Frasch, and his parents, Harley and Kathryn Frasch. His siblings, Beverly Kafka (Tim), and Robert Frasch (Rita), a niece, five nephews, and several great nieces and nephews. Vernon had a special relationship with his extended family; Elizabeth Arrington (Sean), William Lindsay (Cassie), and grandchildren; Griffin, Holden and Harper. Also, his foreign exchange “daughters,” Lily and Yukiko. Funeral services will be held at 11 AM on Tuesday, December 31, 2019 at Prince of Peace Lutheran Church, 1441 W. 4630 S. in Taylorsville, UT. A viewing will take place prior to the service from 9:30-10:30 AM. In lieu of flowers please make a donation to the Kidney Foundation or the Salt Lake Cystic Fibrosis Foundation.

Vernon W. Frasch passed away peacefully on December 26, 2019, at home in West Jordan, UT. He will be deeply missed by his family and friends. Vernon was born December 9, 1959, in Lancaster, CA to Harley and Kathryn Frasch. In 2014, Vernon married... View Obituary & Service Information

The family of Vernon Wayne Frasch created this Life Tributes page to make it easy to share your memories.