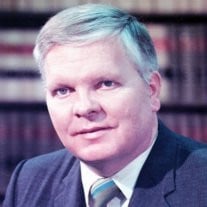 VERNON BRADFORD ROMNEY Vernon Bradford Romney, who served two terms as Attorney General of the State of Utah, died on July 13, 2013, in Salt Lake City, Utah. Vern was Attorney General from 1969 to 1977 and was the Republican candidate for governor in 1976. He was Highland City Attorney from 1977 to 1992. He also practiced law with the firms of Romney, Nelson, and Cassity, and later with Romney, Madsen, and Cummings in Salt Lake City. From 1950 to 1955, he worked on the staff of Senator Arthur V. Watkins and as an attorney for the Federal Communications Commission. An active member of the Church of Jesus Christ of Latter-day Saints, Vern served as bishop of the Colonial Hills First Ward at the same time he was Attorney General of Utah. He also served on the high council of the Hillside and Highland Stakes and as Patriarch of the Highland East Stake and the BYU Fourteenth Stake. He was a missionary in the Eastern States Mission from 1948 to 1950 and later served with his wife Patricia in Charleston, West Virginia, from 1997 to 1998, and in La Jolla, California, from 2001 to 2002. Vern fought in World War II with the 96th Infantry Division in the Leyte and Okinawa campaigns. After the War, he earned a degree in political science from the University of Utah in 1950 and then graduated from George Washington University Law School in 1955. Vern filled his life with enriching activities. He was a member of the Highland Kiwanis Club and was the Grand Marshall of the Highland Fling. An avid BYU sports fan, he traveled to most BYU games and made a habit of visiting college football stadiums while traveling. As a former reporter for the Deseret News, he remained a lifelong news junkie, often reading several newspapers a day. A devoted jogger for most of his life, he completed the St. George Marathon when he was fifty-eight. He started keeping a journal as a soldier in World War II and then continued writing his life story for many years, finally completing it in 2011. In later years, he spent much of his time reading biographies. Above all, he was a devoted husband and father. He was never too busy to talk with and help his children, whom he took with him whenever he could, including when he was Attorney General. He was full of wit and wisdom and kept his sense of humor to the end of his life. Vern was born on April 27, 1924, in Salt Lake City, Utah, to Vernon Romney and Lois Bradford Romney. He was married to Patricia Pingree Romney in the Salt Lake Temple on December 29, 1951. They were married for over sixty-one years. Humor and laughter were constants in their relationship, making it steady and strong. They are the parents of six children: Robyn Romney Evans (J. Robert), Redlands, CA; Vernon Frederick (Rick) Romney (Yevon), Orem; James Bradford Romney (deceased) (Sharon); Douglas Pingree Romney (Deborah), West Jordan; Elizabeth Ann Romney Kelm (Brian), Salt Lake City; and Marjorie Romney Aslett (Grant), Farmington. They also have twenty-one grandchildren and eleven great-grandchildren. Vern is also survived by the following brothers and sisters: Keith Romney, Beverly Cutler, Geraldine Busath, and John Romney, all of Salt Lake City, and Yvonne Dixon of Washington, D.C. A viewing will be held on Friday, July 19, 2013, from 6:00 p.m. to 8:00 p.m. and Saturday, July 20 from 9:30 a.m. to 11:30 a.m. at the Highland East Stake Center (4679 West 11000 North Highland, Utah, State Road 92). Funeral services will be held at 12:00 noon on Saturday, July 20, 2013, at the Highland East Stake Center. In lieu of flowers, donations can be made in Vern’s name to the L.D.S. Perpetual Education Fund. www.LDSphilanthropies.org/perpetual-education-fund Funeral arrangements by SereniCare Funeral Home. To leave condolences visit www.serenicarefuneralhome.com, 801-225-2801.

VERNON BRADFORD ROMNEY Vernon Bradford Romney, who served two terms as Attorney General of the State of Utah, died on July 13, 2013, in Salt Lake City, Utah. Vern was Attorney General from 1969 to 1977 and was the Republican candidate for... View Obituary & Service Information

The family of Vernon Bradford Romney created this Life Tributes page to make it easy to share your memories.