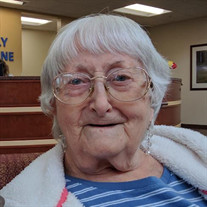 Verona Noreene Morris passed away on January 3, 2019 at the age of 88, in her son Ronald’s home in Herriman, Utah. Funeral services will be held at the LDS chapel at 14068 South 5600 West, Herriman, Utah on January 11, 2019. The viewing will begin at 9:30 AM, and the funeral service at 11:00 AM. Verona was born, Verona Noreene DeMai in Ely, Nevada on September 8, 1930 to Joseph DeMai and Veda Noreene Morgan. Shortly after Verona was born, her mother Veda moved with her back to Veda’s hometown of Beaver, Utah. Verona was a very bright little girl. She regularly won or tied in spelling bees at her Elementary School. She loved music and became a very skilled clarinet player. Vocal music has always been a passion for Verona. She often spoke of how she has been directing choirs since she was 16 years old. Verona fell head-over-heels in love with a strapping young man from Parowan with wavy, jet-black hair named Lyle Ray Morris. They were sealed in the Manti temple in 1949. After their first child was born, Lyle’s Utah National Guard artillery unit was absorbed into the Army and he spent one year in the Korean conflict. After being reunited in 1952, they, like many families, learned to cement their marriage together despite the challenges of post traumatic stress disorder. In 1957, now with three children and one on the way, the family moved by train to the Detroit area. This was a tremendous change for Verona who spent her entire life in small towns of Southern Utah. It became a welcome change that she grew to love. Verona was a faithful member of the Church of Jesus Christ of Latter-Day Saints, where she served in music conducting callings for most of her life. She enjoyed helping to build the church in the Detroit area during their time there. In October of 1991, Lyle and Verona retired and moved to St George, Utah, after 33 years in the Detroit area. Verona is survived by her seven children Peggy Lee, David (Shirlene), Michael, Richard (Marie), Patti (George) Miller, Bonnie, and Ronald (Kathryn), twenty-three grandchildren, twenty-one great-grandchildren, and one great-great-grandchild. She is preceded in death by her parents, her husband Lyle Ray Morris, her son-in-law Thomas Lee, her granddaughter Amber Lee, and great-granddaughter Averiana Morris. Funeral Service will be on Friday, January 11th, 2019 at 11:00am at the Yellow Sage Ward located at 14068 S 5600 W, Herriman, Utah. Viewing prior at the same place beginning at 9:30am. Burial will take place at the Parowan Cemetery.

The family of Verona N. Morris created this Life Tributes page to make it easy to share your memories.