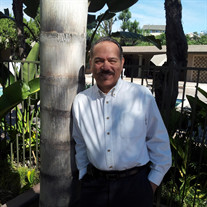 Victor Hugo Maldonado 12 Feb. 1953 &#8211; 18 Dec. 2017 (Age 64) Son of Socorro Garcia Wellin Husband to Jolene Maldonado My father was an extraordinary man in every sense of the word. He was a visionary as well as an intensely emotionally... View Obituary & Service Information

The family of Victor Hugo Maldonado created this Life Tributes page to make it easy to share your memories.