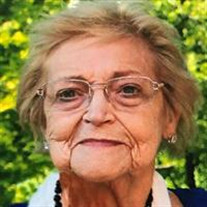 Our beloved mother and grandmother, Virginia Ruth Allen Gordon, peacefully returned home to her Heavenly Father surrounded by her loving family on December 16, 2017 after a valiant fight against Alzheimer’s disease. Mom was born in Wesleyville, Pennsylvania, on April 30, 1932 to John and Elva Fox Allen and grew up in North East, Pennsylvania, with her sister Peggy Oakes (Ken, deceased) and her baby brother, Bill Allen (Darlene). Mom moved to Salt Lake City in 1975 dragging her kicking-and-screaming children behind her. It was the bravest thing she ever did to ensure the success of her family. She lived in Salt Lake until she moved to Moab, Utah, in 1995 to be with her four daughters who had relocated there. Mom loved living in Moab and caring for her grandchildren. It was the best time of her life. She moved to Orem, Utah, in 2012 to be cared for by her children. She graduated with an Associate’s Degree in Computer Processing from Salt Lake Community College in 1978. She later retired from Blue Cross/Blue Shield. Mom was fiercely devoted to her LDS beliefs, her children, grandchildren and great grandchildren. She is preceded in death by her parents and her oldest son, Jeffrey Gordon. She is survived by her children, Susan Garner, Tracy Gordon (Margo), Rebecca Sherwood (Rick, deceased), Laurie Clayton (John), Barbara Bonyata (Joseph), Cynthia Gordon, and David Fox; her grandchildren, Erica Smibert (Joshua), Sean Peterson (Lindsey), Patrick Peterson, Michael Peterson (Liz), Nicholas Clayton (Chandra), Olivia Watts (Justin), Thomas Clayton, Emma Clayton, Isabella Bonyata, Elijah Bonyata, Leslie Gordon (Dave), Scott Gordon, Tiara Velez, Michael Velez; and her great-grandchildren, Cadence Peterson, Kendall Peterson, Grayson Smibert, Ronin Smibert, Adaline Peterson, Sofia Ford, Sabrina Ford, Cole Clayton, Lennox Clayton, Jack Watts; and her great-great-grandson, Liam Wall. No mother could have been more loved. Funeral services will be held at the LDS Chapel at 865 West 1000 North, Orem, Utah, on Thursday, December 21, 2017 at 12:00 p.m. A viewing will be held from 11:00 a.m. to 11:30 a.m. on the same day. Interment will be at the Orem City Cemetery.

Our beloved mother and grandmother, Virginia Ruth Allen Gordon, peacefully returned home to her Heavenly Father surrounded by her loving family on December 16, 2017 after a valiant fight against Alzheimer&#8217;s disease. Mom was born in Wesleyville,... View Obituary & Service Information

The family of Virginia Ruth Allen Gordon created this Life Tributes page to make it easy to share your memories.