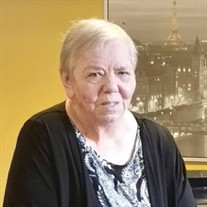 Vivian Mae Brazelton, 77, passed away on Tuesday, November 8, 2016 in Salt Lake City, Utah, from complications with pneumonia. She was born on October 16, 1939 in Rosendale, Wisconsin to Harold Gillen and Irma (Petrich) Gillen. She married Stanley Walter Brazelton on March 5, 1960 in Rosendale, Wisconsin. They were married for 56 years. Vivian moved to Billings, MT with her husband & two oldest children in 1964. Most of Vivian’s jobs were service related. She served her community working in the school lunch program as well as many other jobs. She most enjoyed being a Wife, Mother and Grandmother. Vivian had many hobbies and talents. She was an excellent cake decorator and candy maker. She loved to tend her garden & truly had a green thumb. Vivian always made it a point to remember everyone’s birthday and made them feel special by sending cards and always calling. Vivian loved music and had a great sense of humor. She also had a great love for her animals. Vivian is survived by her children Kevin (Erica) Billings, MT, Melody, Billings, MT and Wade (Loretta), Salt Lake City, UT, along with sisters Nancy (Ronnie) and Evelyn and many nieces and nephews. (Vivian had four grandchildren, Drew, Jason, Tyler & Collin. She was preceded in death by her husband Stanley W. Brazelton and infant daughter Darla Kay Brazelton. A private service will be held in Salt Lake City, UT. She will be laid to rest with her husband Stanley, in Laurel, MT. We would like to thank all of the staff members at Canyon Rim Care Center for caring for Vivian. Also, a huge thank you to IMC Medical Center, R-ICU Nurses, Doctors, Respiratory Team, and CNA’s that treated and comforted her in her final days. Please share memories and condolences at www.serenityfhs.com

Vivian Mae Brazelton, 77, passed away on Tuesday, November 8, 2016 in Salt Lake City, Utah, from complications with pneumonia. She was born on October 16, 1939 in Rosendale, Wisconsin to Harold Gillen and Irma (Petrich) Gillen. She married... View Obituary & Service Information

The family of Vivian Mae Brazelton created this Life Tributes page to make it easy to share your memories.