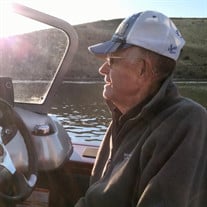 Wayne L Betts 1942 ~ 2021 Wayne L Betts, beloved husband, father, grandfather, age 79, left for his next great adventure on August 22, 2021, Born January 13, 1942, in Payson Utah. He married his wife, Shana, almost 50 years ago. Wayne was an avid hunter and fisherman, in the summer you could always find him at Deer Creek catching his limit . One of his favorite experiences was hunting big game in Africa with his oldest son Lynn . Wayne served in the Army Reserve as a Green Beret in the Special Forces . Wayne loved telling stories about his days as a car salesman and later as a finish blade hand for H&E Lowdermilk working with his father and finishing his career with WW Clyde. His work took him all across the state. Wayne was a jokester, tease and loved putting the young grandkids in bear traps. Any time there was a young face at deer camp the he enjoyed retelling the tale about catching a deer with his bare hands. After his retirement with the Operating Engineers he enjoyed keeping a flawless yard, helping neighbors scrape their sidewalks after a snowstorm and teaching his grandkids bad habits . He is survived by his wife Shana; nine children, Lynn (Patti), Ted (Shannon), Tracy (Brett), David, Crystal, Kelly (Jennifer), Corey, Scott (Elizabeth) and Russell (Jill);and enough grandchildren to fill a church; sister Linda (Garry) and many others who love him dearly. He was preceded in death by his parents. There will a short viewing at 10:30 am followed by graveside services at 11:00 am, on August 28, 2021, at Spanish Fork Cemetery, 420 E 400 N, Spanish Fork, UT.

The family of Wayne L Betts created this Life Tributes page to make it easy to share your memories.