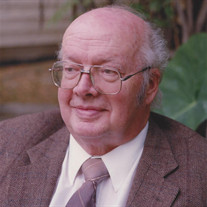 Wayne Walker Holmes, age 88, Orem, passed away on June 11, 2019 in Provo, Utah after suffering a stroke. He was born on March 18, 1931 in Ogden, Utah to William Eugene Holmes and Laura Dell Walker. He married Drauca J. Marston in the Salt Lake Temple on October 27, 1950. They lived in Brigham City for 33 years, moving to Utah County in 2004. Drauca passed away in 2006. He married Marilyn Hart on April 11, 2008 and they were sealed in the Provo Temple on their anniversary in 2009. He graduated from Ogden High School where he was active in the band playing the French horn. He also played the piano and organ. While attending USU he worked in communication maintenance and broadcast engineering, and repaired TV’s (the kind with tubes!) He obtained both his BSEE degree and his Master’s degree in Engineering from Utah State University. He received a Certificate of Competence in Meteorology in California and worked as a weatherman. He served as a Captain in the Air Force during the Korean War, staying state-side in Utah, Texas, California and New Mexico. After discharge he worked in the Aerospace Industry at Thiokol where he retired as a Rocket Scientist Level II. He invented many things and could fix anything! As an active member of The Church of Jesus Christ of Latter Day Saints he served in many callings including Branch President in California, counselor in Bishopric in Brigham City, Scoutmaster, YM President, Stake Missionary as a 70, Service Missionary, and in the nursery—a calling he loved. He served a full-time mission with Drauca at the Joseph Smith Memorial Building and for many years in his local Family History Centers, having indexed over 830,000 names. Wayne is survived by his wife, Marilyn, and her 4 children; his children: Koral (Bruce) Earl, Jenell Holmes, Kaylan (Connie) Holmes, Renald (Jeanine) Holmes; brothers Melvin Holmes and David Holmes; in-laws: LaWana Liljeblad, Linda (Garth) Burt, Penny Chen, and great uncle-in-law Woodrow New (age 100); 14 grand-children, 43 and 7.5/9 great-grandchildren:) He was preceded in death by his parents, his first wife, Drauca; two sisters, Rosemary Blanch McMullin and her husband, Ross, and Irene Steinicke and her husband, Darrell; two sisters-in-law Oresa Holmes and Judith Holmes; and brother-in-law, John Marston. Funeral services will be held Monday, June 17, 2019 at 11:00 am at the Parkway 8th Ward located at 2876 W 1390 N, Provo, Utah. A viewing will be held from 9:30 -10:45 am prior to the services. Interment will be in the Provo City Cemetery, 610 S State, Provo. We wish to thank all of the physicians, nurses, aids and other staff at Utah Valley Hospital who kindly and valiantly worked with Wayne during the 9 days after his stroke. They made our father’s last days comfortable and were wonderful to us! Please share memories and condolences at www.serenityfhs.com

Wayne Walker Holmes, age 88, Orem, passed away on June 11, 2019 in Provo, Utah after suffering a stroke. He was born on March 18, 1931 in Ogden, Utah to William Eugene Holmes and Laura Dell Walker. He married Drauca J. Marston in the Salt... View Obituary & Service Information

The family of Wayne W. Holmes created this Life Tributes page to make it easy to share your memories.