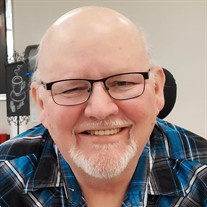 Wayne George Palmer, 61, passed away on March 5th, 2022, in Riverton, UT. He was born on April 3rd, 1960, in Fillmore, UT to Merle and Melvina (Sloan). Survived By Children Jayden (Jasmine) Palmer-Sievert of New Ulm,MN, Kyle (Taylor) Ferguson of North Salt Lake, Michaela Palmer of Colorado Springs,CO. Grandchildren Alaina Sievert, Phoenix Sievert, Max Ferguson, Zoey Ferguson. Brothers and Sisters, Merlene (Hal) Lillywhite, Debi Hertzsch, Patrice (mel) Cossey, Alan (Liz) Palmer, Mark (Bobbie) Palmer, Chris (Jill) Palmer, Mike Palmer and nieces and nephews. Preceded in death By Parents Merle and Melvina Palmer and Brother-in-law Henry Hertzsch. The Funeral and the visitation will be March 10, 2022 at the Church of Jesus Christ of latter day Saints. 12154 South 3600 West Riverton. The visitation Starts at 9am Followed by the funeral service. Burial will follow at the Taylorsville City Cemetery. Thank you to Marijah, Monique, Zoey, Megan and the rest of the staff at The Lodge at Riverton. You guys made his day every time he got to pick on you. Thank you for making him feel like he was at home and not in just some facility. You actually cared for him.

The family of Wayne George Palmer created this Life Tributes page to make it easy to share your memories.