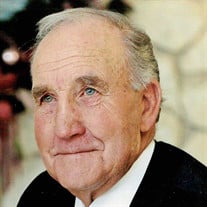 Wendell Pulley Hansen 1924 - 2016 Our beloved father, WENDELL PULLEY HANSEN passed away peacefully at his home, May 10, 2016; the day of his 72nd wedding anniversary. He was born March 20, 1924 in American Fork, Utah, to Ruth Pulley Hansen and John Albert Hansen , who were divorced a month before he was born. He and his only brother, Cecil, were raised by his mother and their grandfather, Andrew W. Pulley. Grandpa Pulley was a tremendous influence on Wendell’s life and taught him the value of hard work. Wendell married his high school sweetheart, and only true love, LaVon Harrington Bennett, May 10, 1944. They were married at the home of LaVon’s grandfather, Leonard S. Harrington by Bishop John W. Pulley, Wendell’s uncle. They were later sealed in the Salt Lake Temple on September 9, 1955. They are the parents of 13 children: Candy H. Taylor, Randy B. Hansen, Cindy H. Carson, Carla H. Jones, Colleen H. Kelley, Camille H. Fowler, Charee H. Broadbent, Brian B. Hansen, Cheer H. Brems, Bruce B. Hansen, Dr. Regan B. Hansen, Troy W. Hansen, and Travis B. Hansen. They have 60 grandchildren and 99 great grandchildren with three on the way. He was proceeded in death by his sweetheart, LaVon, and two of his sons, Randy B. Hansen and Bruce B. Hansen; also, a precious great grandson, Parker Charles Taylor. Wendell picked up on the family business of raising turkeys and grew it to the point of raising a quarter of a million turkeys a year. He built the first feed mill in American Fork. He also had a car dealership, a trucking business, a title company and developed real estate. However, his greatest love was his Arabian Horse business.(Wen Hansen Arabians). The biggest challenge was to breed top foals, and he soon became a world renowned Arabian Horse breeder and his horses have won many national titles. Wendell was heavily involved in community service and was one of the originators of the Utah Valley Football Conference. His baseball team won four world series trophies in the Western Boys’ Baseball Association. American Fork City renamed Beehive Baseball Park to Wendell Hansen Park. Wendell coached many young men in the Bantam basketball program. Wendell served in many leadership positions in the Church of Jesus Christ of Latter-Day-Saints. These include being a member of the Bishopric, High Counselor, Sunday School superintendent and ward basketball coach, which took the All-Church title. A phrase often used to describe Wendell is, “They don’t make them like that anymore.” He is a reflection of another era that made our country great. The most important thing in his life were his wife and his family and the Church of Jesus Christ of Latter-Day-Saints. We as a family thank all of you who have reached out to us with your love and support at this most difficult time. We are truly grateful. His funeral service will be held Monday, May 16, 2016 @ 11;00 a.m. in the American Fork 37th Ward Chapel, located at: 1100 East 400 North in American Fork. A viewing will be Sunday night, May 15th from 6:00 to 8:00 at the same chapel. Burial will be in the American Fork City Cemetery. Please share a memory at www.serenityfhs.com.

Wendell Pulley Hansen 1924 - 2016 Our beloved father, WENDELL PULLEY HANSEN passed away peacefully at his home, May 10, 2016; the day of his 72nd wedding anniversary. He was born March 20, 1924 in American Fork, Utah, to Ruth Pulley Hansen... View Obituary & Service Information

The family of Wendell Pulley Hansen created this Life Tributes page to make it easy to share your memories.