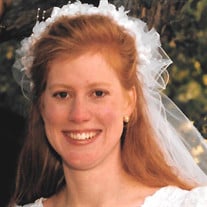 Wendy Merrick Hansen, daughter of George E. (Gene) Merrick and Leona Nelson, was born April 30, 1965 in Ogden, Utah. Wendy died peacefully at home March 23, 2017, South Jordan, Utah with family at her side. Wendy was sealed for time and all eternity to Douglas James Hansen October 14, 1995 in the Salt Lake LDS Temple. Wendy was raised in West Valley, Utah where she attended Cyprus High School, graduating in 1983. After High school she attended Salt Lake Community College where she earned an associate’s degree in business in 1989. Wendy worked at First Security Bank and Merrill Lynch until her graduation. Wendy will be eternally grateful to friends that reintroduced her to the Church of Jesus Christ of Latter-day Saints and inspired her to serve a mission to Albuquerque, New Mexico. Upon her return from New Mexico, Wendy continued her education at the University of Utah. It was there that she and Doug met and started dating. Wendy graduated with a bachelor’s degree in Accounting in June of 1995. She and Doug were engaged in July, and married in October, he still wonders why she said “yes”, but is so grateful she did. Immediately following graduation, Wendy worked for Questar Gas until shortly after the birth of her first son, Nathan, in July 1999. Her second son, Seth, followed in January 2002. Her boys stole her heart from the first time she laid eyes on them, and they remained the love of her life throughout. On her most difficult days, nothing brought a smile to her face faster than hearing a "hi mom" from one of her boys. At the end, her favorite time of day was after bedtime prayers when she would say "come here youz twos" and kiss them each on the head. Whether working on a craft project with them, going to lunch or on a hike, or just being "that mom" on the sideline of a rec league soccer game, she dedicated what energy she had to her boys. We know she continues to watch over them. Wendy enjoyed being busy all the time and particularly enjoyed scrapbooking and cross stitching. She left a treasure of memories for her family through the pages she lovingly created and the needlework she stitched. She loved being outdoors and particularly liked to hike at Silver Lake or go on walks through the various gardens throughout the valley. While her health permitted, she particularly enjoyed going to the temple often. Wendy was a diehard Utes fan and never missed a football game. Even after she could no longer attend in person, she watched every game on TV with her mother-in-law. As health limited her activities, she always found something else she could do to enjoy life, and always found a reason to be happy and try to raise the spirits of her family and others around her. She fought a courageous thirteen-year battle with Huntington's Disease with grace and dignity. Her faith in Christ and determined spirit gave her strength to meet each challenge and her compassionate heart drove her to serve others as she could. She was always grateful to those that served her and there are many who already miss hearing her say “thanks again”. Wendy felt a special bond with the women at church and particularly those facing personal challenges. She loved serving in various callings in the Relief Society and Young Women's organization, but none more than being a visiting teacher, where she could serve individually. Her care was always for those that suffered and people were always her priority. We have lost a beautiful wife, mother, daughter, sister, aunt, and friend. God is rejoicing in the return of a faithful daughter. Wendy is survived by her husband Douglas, sons Nathan and Seth, father Gene Merrick, sister Michelle (Bryan) Burnham, and parents-in-law LaVoy and Janice Hansen who loved her as a daughter, siblings-in-law Steven & DeAnn Hansen, Lynne & William (Bill) Squires, Jeffrey & Elaine Hansen, Terry & Carol Hansen, Gregory & Rachelle Hansen and Susan & Randy Breen who loved her as a sister, and 26 young people that call her “aunt”. Preceded in death by her mother, Leona Nelson. The funeral will be held at 11:00 am Tuesday March 28, 2017 at the LDS Glenmoor Stake Center at 4881 West Cindy Lane South Jordan, Utah. A viewing will be held two hours prior to the service on Tuesday as well as on Monday from 6:00 pm to 8:00 pm, also at 4881 West Cindy Lane. The family wishes to thank the sisters of the Glenmoor 10th and 5th Ward relief societies for their years of loving service. We also wish to thank Dr. Kevin Johnson and the staff at Jordan Valley Internal Medicine and Peak Hospice for their compassionate treatment. Doug and the boys would especially like to thank Grandma (Janice) and Wendy's sisters-in-law for many years of dinners, lunches, cleaning and love. The Hansen brothers all married well, and we were blessed for it. Memories and condolences may be shared at www.serenityfhs.com

Wendy Merrick Hansen, daughter of George E. (Gene) Merrick and Leona Nelson, was born April 30, 1965 in Ogden, Utah. Wendy died peacefully at home March 23, 2017, South Jordan, Utah with family at her side. Wendy was sealed for time and all... View Obituary & Service Information

The family of Wendy Merrick Hansen created this Life Tributes page to make it easy to share your memories.