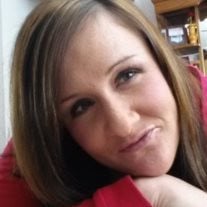 Whitney, age 25, passed away on January 15, 2014 in West Valley City, Utah at the home of her aunt. She was born June 2, 1988 in Gillette, Wyoming to Scott and Cindy McKinnon. Randy Pectol became her stepfather in Glendale, Arizona in 1999. She married Michael Travis Milius in January of 2010. They became parents of two beautiful children, Camille and Cash. She had a zest for life and brought joy to everyone she knew. She also loved unconditionally those she met. She loved music and felt it spoke to her soul. As a young woman in the LDS church she earned her Young Women’s Medallion. She had a contagious laugh that could be heard loud and long. During her employment with Mountain America Credit Union she had a high initiative to learn everything she could to be better at her job. She moved from teller to loan officer to buyer in an unusually short period of time and at a very young age. During her youth she was a very sought after babysitter because she had a mothering heart and a playful spirit which was later used as she became a remarkable mother. Survived by husband Mike Milius, two children - Camille Milius and Cash Milius, mother Cindy (Randy) Pectol and father Scott McKinnon, brother Sean (Amanda) McKinnon, stepsisters Lena Martin and Sara Pectol as well as stepbrother Nicholas Pectol. Preceded in death by grandparents Dewayne and Beverly Perkins and William and Phyllis McKinnon. Services will be held on January 18th at 1:00 PM at the Granger West 6th Ward, 3901 West 2925 South West Valley, Utah. A viewing will be held 2 hours before at the same location. Interment to take place at the Salt Lake City Cemetery. We would like to thank the Serenity Funeral Home for their guidance and concern at our difficult time. Also thanks to all who have expressed their love during these last few days. A special thanks to Denise and Larry Argyle and their family for their love, guidance and support over the past three months. Services are under the direction of Peni Malohifo'ou of Serenity Funeral Home In lieu of flowers, if you would like to make a donation it would be greatly appreciated. Please share memories and condolences at www.serenicarefuneralhome.com.

Whitney, age 25, passed away on January 15, 2014 in West Valley City, Utah at the home of her aunt. She was born June 2, 1988 in Gillette, Wyoming to Scott and Cindy McKinnon. Randy Pectol became her stepfather in Glendale, Arizona in 1999.... View Obituary & Service Information

The family of Whitney Leigh McKinnon created this Life Tributes page to make it easy to share your memories.