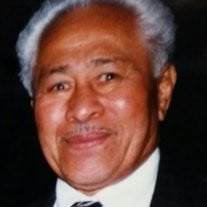 1926 - 2013 William Purcell William Purcell passed away peacefully, November 21st 2013, at the age of 87 in Salt Lake City, Utah. He was born on April 08, 1926 in Malaela, Samoa to Litia Palesasa, and was raised by his Uncle Etuina. He married Nora Te’o June 28, 1980 in Hawthorne, California. William loved being a member of the Church of Jesus Christ of Latter Day Saints and counseled his family in accordance to his strong beliefs in the gospel. He held several positions in the church, serving as a stake and ward missionary, high priest group leader and ward chorister. Dad was very proficient in his scripture studies. He had many hobbies and talents including boxing, dancing and playing the trombone for the Tongan Marching Band for 4 yrs when he moved to Utah. William is survived by his wife, Nora and his children: Kalilimotu, Kathy, Steven, Sandra, David, Nathan and William. As well as many nephews and nieces. He is proceeded in death by his mother Litia and siblings: Mateaki, Theresa, Loimata and Seu. He had a loving heart and wanted to help in any way possible. He was someone who didn’t know how not to give. Dads demeanor of humbleness was expressed through all aspects of his life, and it has been inherited by his family and will carry on for generations. He was well respected, cherished and loved by all those who knew him. He will be dearly missed, until we meet again. Services will be held Saturday, November 30th, at the Mapusaga Ward on 3970 S. 5200 W. in West Valley City. The viewing will be at 9:00-10:30 a.m. Followed by the Bishop's Service from 11-12 p.m. The Burial will follow in conclusion at Valley View Cemetary, West Valley City. Under the direction of Peni Malohifo'ou of Serenity Funeral Home Draper, Utah Our family would like to thank Bishop Brown and the Mapusaga Ward.

The family of William Purcell created this Life Tributes page to make it easy to share your memories.