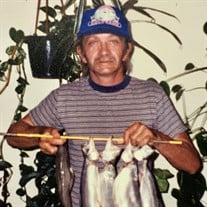 William Gerald Yates, 67, born May 7, 1954 in Lehi, Utah, died February 8, 2022 in the Jordan Valley Hospital following a short illness. He was the son of William Fred Yates and Charlotte (Shurtz)Parsons. Jerry held a very strong work ethic, having worked several jobs throughout his lifetime, but the one he enjoyed the most was being an Iron Worker for Bachman Foundry in Provo, Utah. Jerry loved fishing with his best friend, Troy. He enjoyed boating, hunting and camping and playing drums. Everyone who knew Jerry also knew his quirky sense of humor and more often times than not, his very inappropriate jokes. Jerry loved his family more than anything, they were his world. He will sorely be missed. Jerry is survived by his Mother, Charlotte Parsons, two sisters, Vicki Eastman(John) and Charee (Dennis) Housekeeper. One son, Cory Yates and one daughter, Charilee Yates. He had 4 Grandchildren and 3 Great Grandchildren. Funeral services will be Monday, February 14, 2022. A viewing prior to graveside service will be held at 11:00am at Serenity Funeral Home, located at 13863 South 2700 West, Bluffdale, Utah. A graveside service will follow at 12:30pm at Valley View Memorial Park, located at 4335 West 4100 South West Valley City, Utah.

The family of William Gerald Yates created this Life Tributes page to make it easy to share your memories.